After migrating to our new Datacentre, built around Cisco ACI/UCS and VMware, I've been slowly setting up the Veeam environment we had at our previous DC.
Everything was working fine, until I tired to add a Virtual Lab - at which point I've hit a brick wall, explained in the following two KB articles.

In the past week, I've had opened support calls and posted questions to Veeam, VMware and Cisco - but haven't progressed much further.

The issue is, that portgroups deployed through Cisco ACI require a delimiter character. By default this is the Pipe character, which can be changed - but only to other special characters. These portgroup are considered valid by VMware - they are in fact deployed through their API, and work fine in day to day operation.

When a Virtual Lab is set up in Veeam however, any special characters detected in the portgroup name, instantly produce an error - which prevents the mapping from being created. This is because of a known issue with the VMware SDK.

That this cannot be worked around, I find very extremely surprising - as every other part of Veeam/VMware seems to handle the creation and access of these portgroups without any issues.
But the end result is - that currently, Veeam Virtual Labs and SureBackup jobs are unusable in Cisco ACI/VMware environments.

I've done some testing as part of the Veeam support call, and it appears as though the vNIC is created correctly as part of the SureBackup job (a single pre-populated portgroup exists in the Virtual Lab - you're just prevented from creating additional ones). The next step - where the vNIC is reconfigured to the new mapped portgroup, is the part of the process that fails.
If however, the vNIC is manually connected to the portgroup, by a user in the VMware gui, then the networking works correctly, both inside the Virtual Lab and outside.

Without a permanent fix for this issue, I've requested a hotfix (support call #03487303) - for the Network Mapping error window to be demoted to a warning.
This would allow valid Network Mappings to be created, which could then be manually configured by a user, following the SureBackup creation.

This may be an awkward workaround, but would at least - with some manual intervention, restore some of the lost functionality back.

In the meantime, if any other users have come across this issue, or have any suggestions as to a workaround that can be used - I'd be grateful for any suggestions.
We've just lost two Veeam features, we used quite extensively.
Top

After adding it, restart Veeam Backup Service (be careful, it will stop all your running jobs, if any) and reopen Backup Console.

Thank you! That worked perfectly.

That's exactly the type of fix that I was hoping for, from the support call.
The Surebackup jobs in our new Datacentre, seem to be working the same as our old one now.

I really think that registry key should be added to the KB article (https://www.veeam.com/kb2074).
From a quick search it looks as if it has been around since 2014, but support staff and developers seemed to be unaware of it.
Certainly - my request for a hotfix can be cancelled now (case 03487303).
Top

Just a thought, but why is the limitation still applied?
From my testing so far: as soon as that registry key was added - the Virtual Labs worked correctly, as designed, without any networking errors caused by the symbols.
Both the error and KB article seem to be redundant, if the behaviour with the registry key added was the default.
Top

[MERGED] [Bug][SureBackup] is not compatible with ACI Port Group

Our production System is using Cisco ACI System, all Port Group is named such as <DCname>|DC-Production|EPG-203. it contains the "|" character. So i cannot add to "network mapping" window. 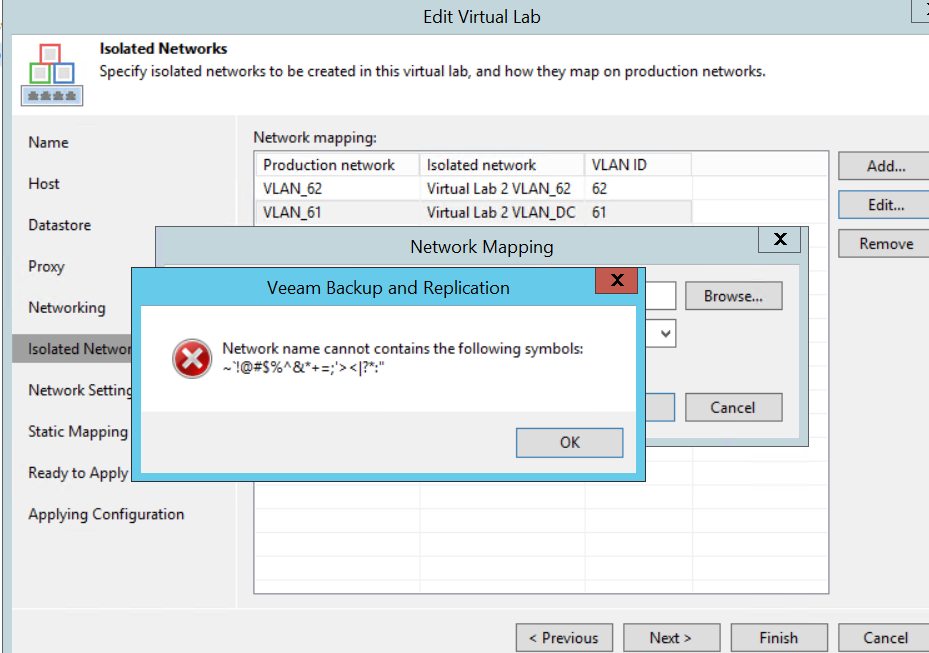 Re: [Bug][SureBackup] is not compatible with ACI Port Group

i found solution from @HannesK (Veeam Software) on other post in this forum. Thank you.
Top

We are facing the same issue in our environment. I will try the posted solution.

It would be great to add this information on the KB article (https://www.veeam.com/kb2074).