My intention was to have 2 weeks worth of backups. I have another Legacy backup application that backs up to tape due to the variety of servers I have to support which has a longer retention which is why I figured 2 weeks worth of VEEAM backups should be sufficient. I can always restore an older VEEAM full backup from tape if I ever needed something older.

I don't understand why the dates of the large (so I am assuming they are full) backups are on Tuesdays, not Fridays.
From searching the forum I gather once an active full backup runs it rolls up some incrementals? It isn't rolling all of them up as there are 3 incremental sized files in between each full.
For now I have reduced the saved restore points to 10, and I am hoping the incremental backup that runs tonight will clean out older backups automatically to make some sorely needed space.

I am just wondering where to look to get a better understand of how all this works so that I can retain a couple of full backups with about 2 weeks worth of backups.
Top

Hi Caterine, a screenshot showing what files do you currently have on disk and the job schedule would help to explain what's happening.
Top

I don't see where I can add attachments. Do I need to set up an some kind of picture account and point to it?
Top 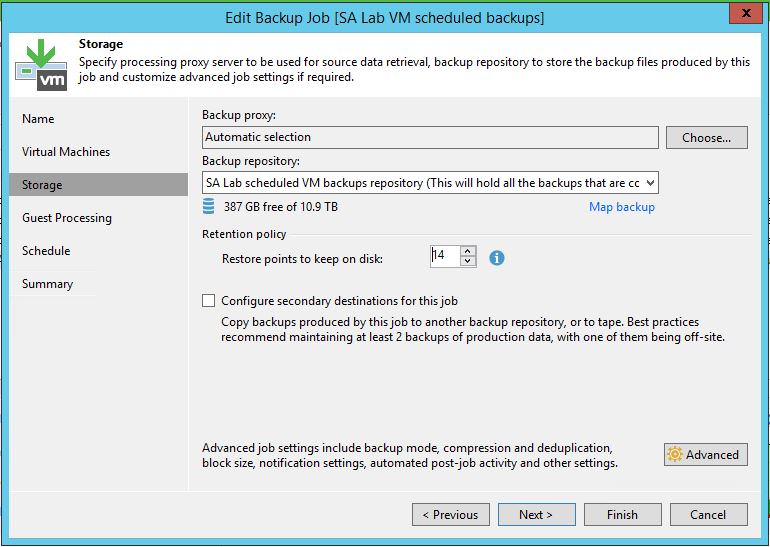 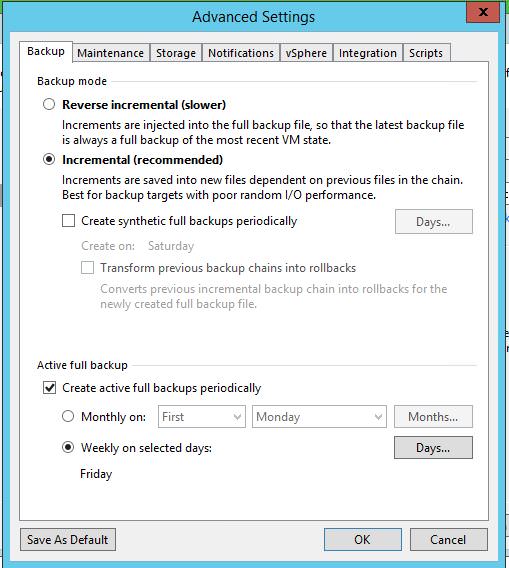 Please can you provide screenshots of schedule tab too, as it looks like the job limited by Backup Window option to move VM data on Saturday, Sunday, Monday. Thanks!
Top

I bet the schedule is every day at 9.30pm. Caterine, looking at the date/time stamps in the file names, we can see that the full is actually started each Friday, at 9.30pm, and lasts for several days - until the date/time shown in the "Date modified" column. That's why there are no increments for Sat, Sun, Mon and sometimes other days - the job is still running making the full backup. So the issue you should pay attention at is the backup speed actually. What do the job stats show in terms of the speed and major bottleneck?
Top

Ugh, that again. I had a ticket a few months ago, needed to reset cbt on some VMs, but still didn't get to a couple. I thought I had seen backups completing relatively faster after fixing a few key ones.
Thanks for noticing. I guess current task assignments left me too distracted to notice something so obvious.

I am going to turn off indexing on one of the worst culprits. support said it shouldn't be an issue, but this VM is really a backup of files for a Linux 'server' which is really a device our company has sold converted to a development server with a modified kernel that VEEAM doesn't recognize and my legacy backup software also won't install on. The engineer set up a backup job that had originally been a gzip task but it also took way too long so he switched it to some kind of rsync setup. The shear quantity of small files is a real chore for the OS.

In the below I see I do need to pressure engineering a little harder to allow me to redo the CBT on the few I have left.
Ignore warnings and error, they are irrelevant to current problem.

Turning indexing off wouldn't help much, unless this is the longest stage the job sits at, according to the job session log. Ability to use CBT would improve performance significantly.
Top

Engineers letting me take care of CBT on 2 of the 3 still not done. Hopefully also the third.
They had snapshots, do snapshots impact backup times since VEEAM also creates one for its backup?
I hope I don't have to redo CBT on the other one. Would be an annoyance if I had to do that regularly.
Top

If the VM has snapshots at the time it is backed up for the first time, CBT cannot be enabled for it.
Top

Interesting because for the second one I accidentally tried turning on snapshot before powering on per engineer request after I followed the CBT kb and it gave this error.
"An error occurred while taking a snapshot: Could not open or create change tracking file"
Once I powered it on snapshot was easy.

I have asked engineer if I can turn off snapshot for tonight's backup at least.
Top

I have multiple hosts, links are all 1 GB, but my backup server is host to two backup programs. VEEAM and Networker. Up until some months ago things seemed to be working out just fine, but I guess the number of VMs and the space usage has increased significantly that I am going to have to assume an active full is just going to take 3 to 4 days to complete.
Without changing my current hardware, any best practices that I could tweak what I have?
The backups all seem to be pointing to source as the bottleneck.

I am wondering if I should just give up on the active full backup selection.
Have there ever been any problems restoring from synthetic fulls?

I could just go with the incremental only and have synthetic fulls run during the day on Friday.

Would that make more sense, or is there some security in having an active full vs synthetic full?

If the bottleneck is the source, would it make sense to set up multiple backup jobs? I just figured one and VEEAM would handle any multithreading.
Top

If source is the major bottleneck, pay attention at the transport mode that is used to retrieve data from the datastore. As for the need for active full, here's a good topic on that.
Top
Post Reply
14 posts • Page 1 of 1