a new VBR-Server on HPE DL380 Gen10 hardware replaced our old HPE DL180 G6 hardware. The old server was renamed and Veeam services had been disabled. Everything was documented very well. The new HPE DL380 Gen10 is up and running, all configurations have been implemented including B2D- and B2T-jobs, repositories, proxies and tape media pools. Everything is fine now.

I shifted every tape in its original Media Pool and cataloged the monthly full and daily incremental tape. They appeared under 'Home => Backups => Tape' with all restore points for every VM. Fine.

Finally I copied all B2D-disk-files (*.vbk and *.vib) to the new system, it took some time. After everything was copied, I imported the B2D-disk-files from the corresponding repository. Unfortunately, the B2D-files have been imported to 'Home => Backups => Disk (Imported)', which is the standard (i know).

When I start the B2D-job, it creates a new directory in the repository with the suffix '_1' and the B2D-job creates new *.vbk files. Bad one!

Is it possible to connect the B2D-disk-files from the old VBR-Server with the newly created B2D-job on the new VBR-Server, which has the same name and the exact same configuration and the same vCenter connected, VMs have not been moved anywhere else.

I would like to start the new B2D-job and wished he would detect, that a *.vbk file already exists and that backup continues as an incremental backup.

Any ideas how to manage that?

If B2D-disk-files can't be somehow connected with the new B2D-job, I am forced to do a full backup this weekend, which would be no problem, though we only do monthly full backups on last friday of the month.

The new HPE DL380 Gen10 is up and running, all configurations have been implemented including B2D- and B2T-jobs, repositories, proxies and tape media pools.

Can you please clarify were backup jobs recreated on the new server or configuration has been restored from your old server? Thanks!
Top

jobs have been recreated on the new VBR-server (exact same configuration), but I suppose that's the problem. In the meantime, we have done a new full backup last weekend, which went fine, as expected.

Next Friday (Last Friday of the month) the next monthly full backup will follow and everything will be, as it was before.

Thanks for the clarification. For newly created jobs you should use mapping functionality (Map backup link at Storage step of backup job wizard) - otherwise first run will ignore imported backups from previous Veeam B&R installation. Cheers! 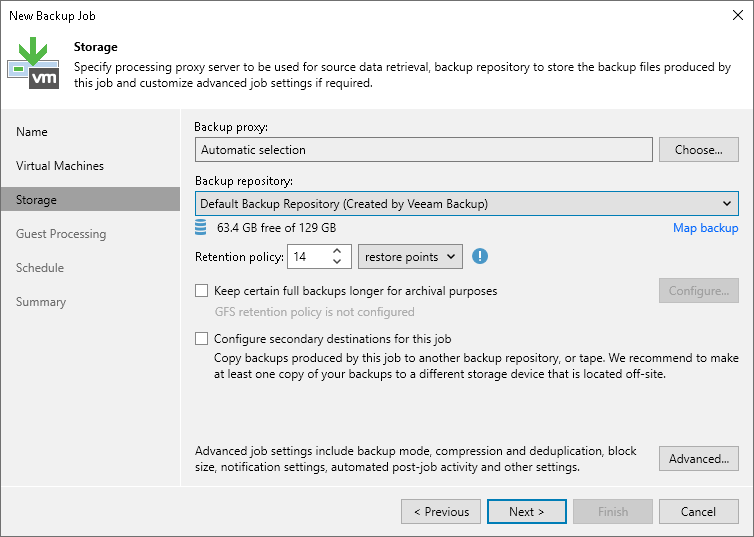 Thanks.
Using the most recent Veeam B&R in 19 different environments now and counting!
Top
Post Reply
5 posts • Page 1 of 1