Hi,
anyone using the new File Share (NAS) Backup Feature of v10 to Backup Files from ah Netapp Share allready?
i'm trying to use the NetApp Snapshot as Source, as some Files are always locked on the share for specific reasons and so cannot be back'd up.. so using VSS/Snapshot should fix this..
when configuring the Share there is the advanced option to choose from direct, VSS or using specific snapshot path...

the last option, "specific" Path is some kinda weird, i could trigger of course a snapshot via script, or even via netapp snapshot sheduling, but the next issue is that the snapshot names are date & time specific, so there is another line in the script needed to change the "latest" snapshot creation to ah common name that doesn't change...

using the VSS option could be an option, but is failing here on "access denied"... i see there is some "remote vss options" on netapp side available, they using this with snapmanager SQL and HyperV to backup from SMB3 shares... but clearly this states that on netapp side the "continuously available share" must be enabled, one doneside of this, its not recommended to enable this feature on an "normal user" share.. as every client is then sending heartbeats to the share whats stressing the netapp storage controllers alot! if tested this now with ah 2nd Share to the same folder on my netapp where i enabled the feature.. still getting the access denied error... my backup user should have every rights needed...

another thing i found in netapp kb articles. this should only work with hyperv vms (vhd) and sql server files anyway, at least its reads like that:

https://library.netapp.com/ecmdocs/ECMP1196891/html/GUID-684E0B89-80BE-48C1-AD6F-1D0C5FE65342.html wrote:You can use Remote VSS to perform share-based backups of Hyper-V virtual machine files that are stored on a CIFS server.

Microsoft Remote VSS (Volume Shadow Copy Services) is an extension of the existing Microsoft VSS infrastructure. Previously, VSS could be used for backup services only for data stored on local disk. This limited the use of VSS to applications that store data either on a local disk or on SAN-based storage. With Remote VSS, Microsoft has extended the VSS infrastructure to support shadow copy of SMB shares. Server applications such as Hyper-V are now storing VHD files on SMB file shares. With these new extensions, it is possible to take application consistent shadow copies for virtual machines that store data and configuration files on shares.

i found another limitation for remote vss:

Take a look at this blog post Advanced Veeam NAS Backup from Marko. It explains how backup via alternative path should be configured with NetApp.
Top

I'm Veeam's Global NetApp Architect. Happy to assist with any questions you might have on using ONTAP snapshots as a source for Veeam NAS backups. Also @marco.horstmann is an expert here as well.

Using VSS to create/remove a snapshot is the recommended approach for SMB share backup from ONTAP. Be sure that you have DNS set up properly and are adding the share to Veeam with DNS and not IP address, for example "\\svm-name\share-name" and not "\\192.168.100.200\share-name". VSS needs DNS to work properly.

On my lab ONTAP systems, I did not have to change any default settings to get VSS to work with Veeam. I've tested ONTAP 9.x.

On the link you posted regarding directory depth I don't think applies to what Veeam is doing. I've got test shares that are much deeper and have not had any issues with the snapshot creation that we are doing.

Please let us know if you're still having issues with VSS snapshot creation with SMB shares. For NFS shares, please see Marco's powershell scripts over at https://github.com/VeeamHub/powershell/ ... kup4NetApp

Hi Adam,
i've used the DNS Name, its resolvable to the ip of the SVM...
i've done some tests, installed snapdrive and the snapmanager HyperV as i thought maybe something is missing to trigger the remote vss, but still i receive the "Access Denied Error code: 0x00000005 Failed to obtain shadow path for backup item ....... failed to perform pre-backup tasks"

the user i'm using to access the smb file share is administrator on the netapp and svm are there any special "privileges" needed? i can change something in the svm settings for the groups... 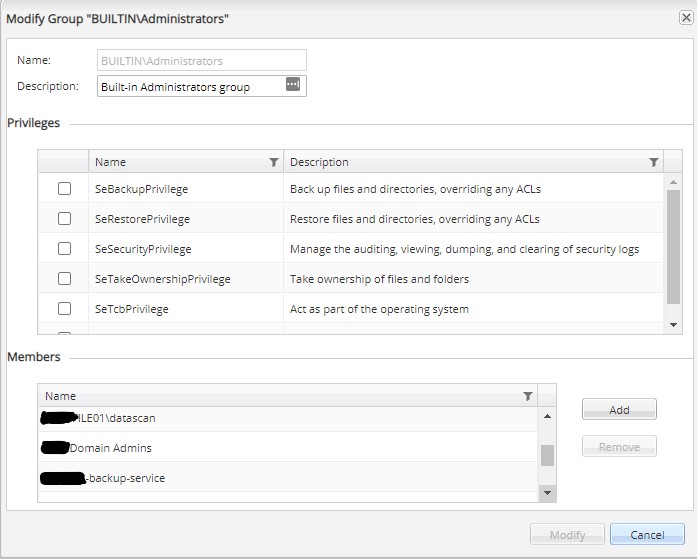 I followed th very good post of Marco Horstmann, very interesting.
But unable to reply in his post, seems to be a Captcha problem.

Just one question, i create a batch file to invoke snapshot NetApp + credentials, started manually everything works very well, but from the veeam backup job, it don't.
Veeam seems to be not able to create the snapshot NetApp,
in the post Marco mean to be careffully with the credential part (Local system), i am not understand, sorry

I created de crendentials xml file from my admin local account on the Veeam B&R server, i think it's the problem because all Veeam services starts with "LOCAL SYSTEM" , right ?

Thank you for your help


I've done some tests, installed snapdrive and the snapmanager HyperV

Veeam's NAS backup is strictly for unstructured data, and not for Hyper-V, and does not require any NetApp software. Maybe there is some confusion on what you're trying to protect, and the Veeam capability you are selecting.

Can you describe the data you are trying to protect? Where does this data reside? On a Windows Server or directly off of an SMB share in ONTAP?
Top

Adam.Bergh wrote: ↑ Veeam's NAS backup is strictly for unstructured data, and not for Hyper-V, and does not require any NetApp software. Maybe there is some confusion on what you're trying to protect, and the Veeam capability you are selecting.

Can you describe the data you are trying to protect? Where does this data reside? On a Windows Server or directly off of an SMB share in ONTAP?

Hi, no sorry for causing confusions... i'm trying to protect ah SMB/Cifs Fileshare (of course directly) on an NetApp Ontap (9.1p17)
i just read through netapp requirements for Remote VSS and Netapp states specifically HyperV and SQL (as these services are alowed to run on an SMB3.0 Share) and just because of this i tried all the requirements for "Remote VSS" in Veeam too... as i don't see what could be wrong on the other side as it just don't work here, and everyone is telling me there should be nothing special that this gonna work...

as i wrote allready, the user i'm accessing the share is full administrator on the netapp, the share/Cifs SVM is SMB3.0, the share is browsable, continously-available (only for testing right now, but doesn't make any difference, but as i also wrote earlier this shouldn't be setting for normal user accessing shares, reason see above, and show-previous-versions and showsnapshot is enabled too...
Top

Hi Stephan, sorry for late reply. I had not seen before that Adam has mentioned me.

The only time I had really problems to get access to a share was a name resolution problem.
I had added the share to VBR using the ip address and my server was not able to resolve it to
a NetBIOS name which is needed for vssadmin.

You can try the vss part manually to see if this is the initial problem.

@rpop The problem with my script is that it always runs from the security context of VBR which is by default LOCALSYSTEM. So in my blog post I used psexec to start a shell within LOCALSYSTEM context to save the encrypted password to a file. With this credentials you're able to start the script from VBR. See how I did it: https://horstmann.in/store-powershell-c ... encrypted/
Marco Horstmann
Senior System Engineer @ Veeam Software

I just had a call with @Herbert Sz and figured out that in his lab the VBR server is not
a domain member. For this reason he was in my opinion not able to request remote VSS snapshots.
Herbert will test if it is needed that VBR server is in domain or just the file proxys.

He will give you feedback about the results.

For all how maybe read this later. Remote VSS Support seems to be only supported by Microsoft if both
the requester and the server how hosts the share are joined in the same domain. See
https://docs.microsoft.com/en-us/previo ... v%3Dws.11)
for reference.

I just finalized my tests, so collecting @marco.horstmann's remarks and my findings:
.) filerproxy and netapp's cifs-server's system name must be in the same AD-domain (VBR server can be in a workgroup or other domain),
.) cifs-server's system name must be resolvable via reverse DNS,
Everything else should work out of the box, at least it worked for me with Ontap 9.4:
created CIFS-Server on SVM connecting it to AD-Domain, added fileshare.
Configured this fileshare into VBR server with advanced option "backup from Microsoft VSS snapshot", defined a Windows Server as filerproxy in above mentioned AD-Domain, created filer backupjob using this filerproxy, and RVSS worked fine.
No further specialities were necessary in my case.
Fileshare must be SMB3, as described in the docs.
Top

hey again, i've done some testing yesterday with Herbert, one of the tests was to create ah new share on the same SVM that does not like rvss (still) and this share did worked well sofar!
i checked every setting now on the other share, and cross referenced it with my newly created share... don't see any differences .. still the other won't rvss successfully...

i will open an case soon so that support can check this...

one test i will do before opening a case, i gonna copy everything from my othershare to the newly created one, maybe somewhere in the files or filestructure (folder depth?) is the key to the issue...
Top

Hi marco.horstmann
Thank you for your reply, it's ok, it works very well !

I've got error on calling snapshots from NetApp through VBR like Daniels' case here: file-shares-f57/netapp-cifs-nfs-share-b ... 64899.html

I am wondering if there's any error to execute the pre-job scripts to call Netapp ONTAP for snapshot creation (connection error/credentials/etc...)
already followed the suggested step for powershell credential creation
https://horstmann.in/store-powershell-c ... encrypted/

Any idea on the error is appreciated, thanks.

Users browsing this forum: No registered users and 4 guests