yesterday I had to test a restore of one VM where all disks but the System disk are excluded from the backup job ("System disk only" selected in Exclusions). I chose to restore the entire VM with registration and noticed that the restore failed because the VMX file was not found: 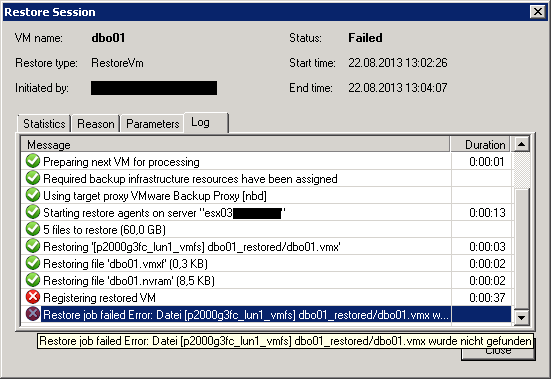 It's also strange that Veeam doesn't even try to restore the VMDK file, even though it is definitively in the backup. For instance: When choosing to restore the VM files only (instead of entire VM with Registration), all files are successfully being restored! It's also visible in the backup logs that everything is correctly backed up.

I tested this with several VMs and it is reproducible on all VMs which have set "System disk only" in the backup Job Settings. We are currently using one VBR Server (6.5.0.128) with vSphere 5. Is this a known issue or am I missing something here?

Do you have “Remove excluded disk from VM configuration” option enabled in the disk exclusion settings? Thanks.
Top

Thanks for your reply. No - it's not enabled. But in my opinion this shouldn't make a difference. Disabling the Option shouldn't Change the configuration at all and enabling it should only remove the excluded disk. As to my understanding, the system disk should always be present.
Top

If you’re willing to restore smoothly entire VM with excluded disk, this options needs to be selected. Otherwise, restoration task will fail with the said error, and the only option you will have in that case will be “VM files” restore. Thanks.
Top

Okay, thank you. I will enable this for the corresponding machines and will try a restore once a new backup has run.
Top

The best strategy, indeed. Kindly, keep us updated about the results you get. Thanks.
Top

I just tested a restore and now it is working fine! Thank you.
Top

You’re welcome. Feel free to contact us, should any other questions arise. Thanks.
Top
Post Reply
8 posts • Page 1 of 1

Users browsing this forum: No registered users and 21 guests