I think this request is not new but I think we need to stress it again. I was recently at one of my TAM customers site and we discussed with the backup team proxy server placement for their cluster.
They are using cluster specific to OS versions, e.g. Linux Cluster for all their RHEL or Windows Cluster for all their Windows VMs. If we would place a proxy in the Linux cluster the customer needs to license all the hosts with windows just for 1-2 proxy VMs. This would be a really good use case for having the proxy components as Linux binaries or as preconfigured linux appliance.

Currently only speaking for proxy components but in the near future it should also be possible to have a VBR appliance. I can image because of the used framework, SDK whatever this could be the most challenging part.

I am just thinking ahead but how will this work with the upcoming CDP/IO filter feature in V10? Is the proxy role still required when there are no VM snapshots?
Top

We can't share too many details yet but, even if the proxy is not needed anymore to read the freezed vmdk from a datastore, data still needs to be read at source and written at target, otherwise you would just need VAIO to do the replication without any other software

So, there will be still be a "proxy", with a slightly different role.
Also, VAIO framework has two allowed use cases for now, which are caching and replication, so you would still need the good old proxies for backups.
Luca Dell'Oca
Principal EMEA Cloud Architect @ Veeam Software

Cool, maybe there exists an opportunity for a Linux VAIO proxy since really it's just grabbing changed data blocks from the IO filter and hurling them to target proxy

If you look at VAIO architecture, or once you'll see our implementation, I'm pretty sure you will figure out that is not really "just" grabbing data. But I'm sure you already know it, and just trying to tell us that we should do the linux proxy because "it's easy"

[MERGED] Veeam components under Linux as an appliance?

For a long time now we have been running Windows for our Veeam components to backup our farms.
Due to the ever increasing changes to the way Windows 2016 now has to be licensed to all cores of the underlying host (and increasing costs), is it possible to resurrect discussions about Veeam B&R allowing for the Veeam transport layer to be able to be deployed as a Linux based appliance.

We switched to the vcentre appliance model in Vpshere 6.5 at launch time and have never looked back - it has dramatically simplified management of our farm.
By the same token it would be great if the Veeam components could be deployed as Linux based appliances using PostgreSQL as the DB engine.

We are obviously aware that we currently need to run data centre licenses to license all OS's running on the physical tin (as we are running all Veeam layer virtualised).

Another "me too" for this FR. An OVA proxy would tick so many boxes for my clients. I can't believe this topic started in the 6.x era and still hasn't been resolved and it's nearly 10.x time!
Top

Just going to add my Voice here too - I've run into a situation recently where I have to have a remote backup proxy and a Linux Proxy would be ideal.
Top

Yesterday I noticed a very interesting tweet pop up in my time line, the tweet was by Michael Cade (Global Technologist), who is currently attending NEXTConf in Nice. For those who may have missed the tweet here's the link https://twitter.com/MichaelCade1/status ... 6037042178

now what got me curious was the wording 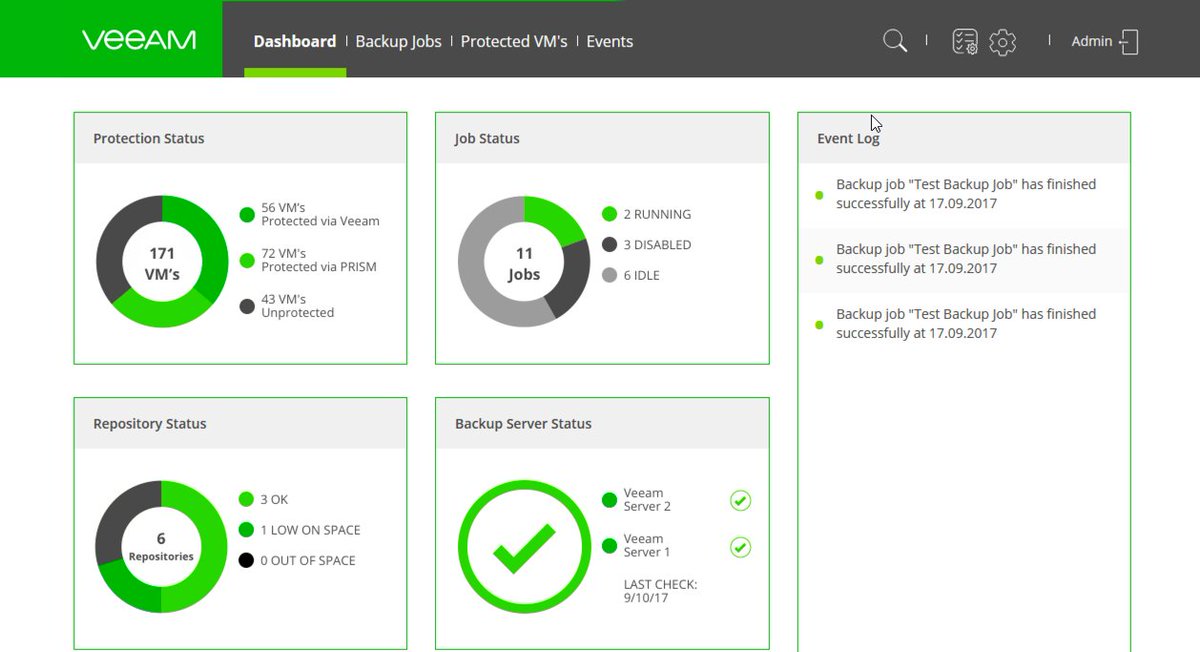 Not Prism interface ...but Prism like. To me this meant a new Veeam interface, and looking at the interface a nice shiny new HTML one at that. I asked Michael to clarify if this was a new Veeam dashboard or a new section of Prism. His reply was an unexpected one

WOAH ... a Veeam Linux appliance with its own Web interface.


1) people have been asking about appliances for a while now, so are Veeam starting to take notice. Things like the VMware move to a Photon appliance for vCenter is a good thing, so why not Veeam?
2) people get to save money by *not* needing Windows licenses to run VBR servers
3) more secure (less patching....but that's up for debate)
4) the illusive HTML management console so many people ask for.

Thanks for sharing.
Top

Yeah... #3 is very debatable indeed, based on the last couple of years

Agree with Anton there on point #3 ...you need to look only at VMware's VCSA. They have now got a out of band OS patching program for that appliance that goes hand in hand with standard vCenter patch releases...even for PhotonOS.

Don't get me wrong, I love a good appliance, but there is a difference between a pre packaged OVA with bits installed on a standard OS vs a cut down lean appliance with a purpose built minimal OS with the bits integrated.
Anthony Spiteri
Senior Global Technologist, Product Strategy
Email: anthony.spiteri@veeam.com | Mobile: +61488335699
Twitter: @anthonyspiteri
Top

This is a fantastic idea and I've been suggesting this to Veeam's customer feedback program for 2 years now (Veeam linux appliance). I'm glad to see there is movement on this topic.

Please look at building an Active/Standby setup to the appliance as well.
Top

I'm awaiting the Photon 2.x based Veeam appliances for Management, Proxy and Repository. Or maybe not repository unless they can get ReFS features and speed to match 2016 ReFS)

But management should be there already, together with IPV6...

Should we be concerned the last time a backup ran was two months ago?
Top

the VCSA (vcenter appliance) has its own issues. i speak from experience - it's well known that restarting it or just doing simple functions in the GUI can cause the postgresql DB to fail. Not sure if it's completely resolved in the latest build, but i've had it fail on me with older builds.....the most common, fastest, and easiest 'fix' is just to redeploy the appliance. but if you redeploy a new appliance - veeam will see a new VCSA and that will cause issues with your jobs and the veeam DB bc of the unique identifiers. I've actually figured out a way around that without having to edit the veeam DB. you just need to create a cname record in DNS pointing to the old server name. without doing that, you would have to re-replicate and re-backup all VMs upon connecting veeam to the new VCSA. not the end of the world with backups over the LAN, but there was no way we could have re-replicated all of our VMS over the WAN. some may think, 'well - why not just restore a back up rather than redeploying?' according to my judgment - you would be restoring a faulty appliance to have the issue arise again. so i just redeployed to the latest build in hopes that the issue is resolved.
MORAL of the story is twofold i think - wait until all of the kinks and such are worked out before jumping on board (goes without saying, bc that's pretty obvious), and also consider using an diff external DB other than postgresql....
Top

daniel.farrelly wrote:Should we be concerned the last time a backup ran was two months ago?

Not if your RPO is 3 months

I'm still dreaming about Linux VMs which can be deployed with proxy role. That would be a great thing. It would also help save money because you don't need a Windows license for a VM which is only working during backup (if proxy role is not on a production VM). This new Prism like interface looks nice. Looking forward to the next great Veeam release

Considering that the network proxy is Linux based I'm surprised we don't have a Linux backup proxy yet - would be very useful for me, to have in cases where cloud connect isn't suitable.
Top

+1 for a Linux backup proxy. I think that would be the single most useful appliance Veeam could develop.
VMCE 9
Top

Another +1 for a Linux backup proxy.
Top

+1 for a Linux proxy backup and Wan accelerator.
because the cost of licensing is limiting. Appliance of course
Top

Better than Flash...*ahem* looks sideways at the other product we all know did THAT to us...')
Top

Many people here and out there are requesting linux proxies and all that has been said from veeam side was "We would like but there are some technical limitations which make it impossible for using linux as proxy appliance".

Ok, good to know but I'm curious to hear what the limitations are... From a customer's point of view, the roles of a proxy are:

I think the first two arguments could also be managed by linux, probably the last one would be more tricky or even impossible. Are my assumptions right or is it more about incompatibilities with file systems and such things?

I know that we are here talking about technical details which could be top secret for veeam and I understand that veeam tries to hide those information, but probably there is a way to give us here a better understanding why only windows can do the job without giving too much information. Sometimes you have discussions about licensing and costs and then you should be able to argue why only windows can do the job...
Top
Post Reply
93 posts